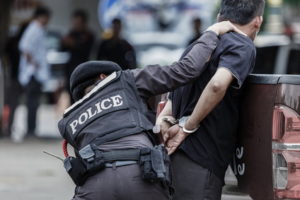 Adam Law Solicitors offer expert legal advice for anyone facing, or worried about facing, prosecution for Affray. We have a dedicated criminal defence team who have many years experience of all charges of criminal activity.

If you are concerned you may be facing charges for affray, or are already facing charges, it is essential you contact us as quickly as possible.  Phone us now on  0114 256 0111, or email us or use the form on this page.

Under section 3 Public Order Act 1986 a person is guilty of affray if he uses or threatens unlawful violence towards another and his conduct is such as would cause a person of reasonable firmness present at the scene to fear for his personal safety. Where two or more persons use or threaten the unlawful violence, it is the conduct of them taken together that must be considered. A threat cannot be made by the use of words alone. No person of reasonable firmness need actually be, or be likely to be, present at the scene. Affray may be committed in private as well as in public places.

What are the penalties for Affray?

What level of proof is required to convict for Affray?

Under section 3 of the Public Order Act 1986 it must be proved that a person has used or threatened:

It is not enough for the prosecution to prove that unlawful violence has been used. There has to be violence of such a kind that a bystander would fear for his safety. Where the violence is focused solely and exclusively on the victim, such that it would be incapable of causing a person of reasonable firmness present at the scene to fear for his safety, then the offence is not made out.

What kind of behaviour could be convicted for affray?

Examples of the type of conduct appropriate for a section 3 offence include:

If you are concerned you may be facing charges for affray, or are already facing charges, it is essential you contact us as quickly as possible.